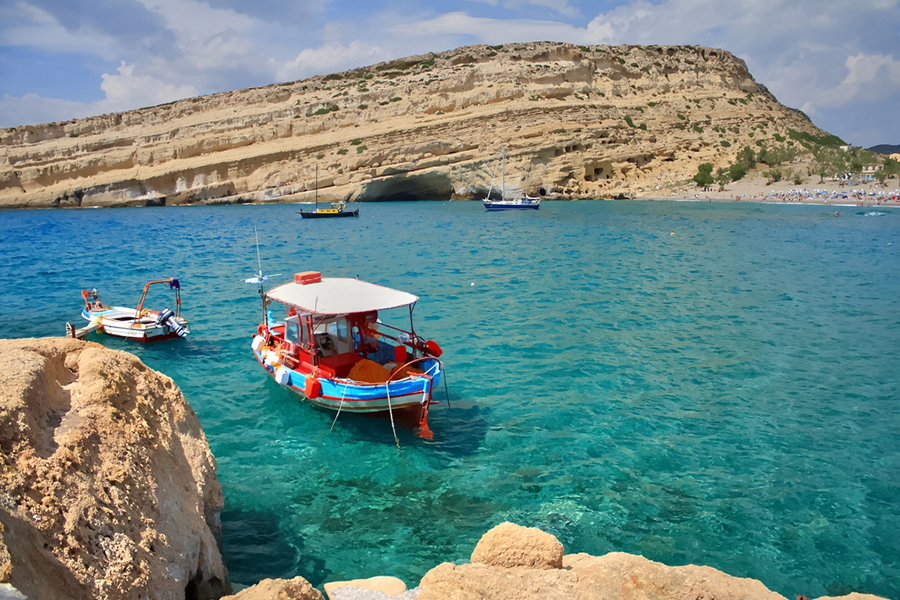 A day full of interesting visits to archaeological sites and plenty of time for relaxing on the beach. Begining with a tour through the rich vineyards of Malevisi province and a short stop for a coffee break in a lovely area. We will continue towards the largest plain of Crete, the Messara Plain, where you can find a lot of greenhouses with an enormous range of vegetables and fruits.

Our first major stop is in the remains of Gortys, an important Greek - Roman town, in the south of Heraklion. Here you will see the "Gortyn Law Code" inscribed in Cretan Doric language on a stone, dating from 5th century BC.

This is the evidence of a complex judicial system of the city, with laws pertaining to marriage, divorce, inheritance, adoption etc. The code stones are still preserved and exhibited in the north round wall of the Roman Odeon at the Gortyna site. Here you can find the St. Titus church as well, where Christianity was first introduced to the island, and also the temple of Apollo Pythios dating from 700 BC.

About 61km from Heraklion you can find Crete's second most important Minoan archeological site, the Palace of Phaestos. Like Knossos, the palace has been built twice. The original palace was build at about 2.000 BC, but was destroyed by fire and replaced with a new palace around 300 years later. It is an important Minoan center with beautiful architecture and impressive structure.
Here the famous Phaestos disc was discovered. The disc itself represents one of the world's mysteries; since the clay was containing a material that could not be found in Crete, and the language that was imprinted on both sides were in a circular manner, it is still unknown.

After Phaestos we will travel the short distance to the coastal village of Matala, which used to be the port of Gortys. Owing to its exceptional natural beauty, Matala became the meeting place of the "Flower Children" in 1968. Here apart from time for relaxing in the beautiful bay of Matala, you will have the opportunity for having a lunch break as well as exploring the ancient caves.